I never tire of making a side trip to the Ninilchik (Alaska) Russian Orthodox Church (Holy Transfiguration of Our Lord Church) on my way to Homer. What draws me to that place? Perhaps it is the idyllic setting of onion- shaped gold spheres against the sunny blue sky which canopies the Cook Inlet and distant white-topped Mt Redoubt and and Mt Iliamna in the Chigmit mountain range. Or perhaps it is a somber drippy gray day with views cut-short and focused on the nearby tall green grass and magenta fireweed; all sparkled with water-jewels. On such a day, the gray streaks in the time-worn white wooden fence pickets are vivid.

Maybe it is the mysterious-to-me personalized individual cemetery plots, some within stubby picket fences. The Items placed on the burial mounds offer a glimpse of personalities and interests: a bird book, stuffed animal, memento, or a picture. Some plots contain Thumbelina-size landscapes. I can picture loved ones on their hands and knees, slowly and deliberately arranging rocks, shells, sticks, sand, and short vegetation.

Possibly the  lure is the intriguing colony of family lots with names such as Cooper, Oskolkoff, Kvasnikoff, Jackinsky, Encelewski – all descendents of the first settlers who were indigenous Alutiq and Russian fur traders.

On the other hand, my propensity may have to do with my sixth-grade best friend, Karen Isaak, who has a son buried in the cemetery: Matthew Encelewski.  A son born in the same month and year as my own son. A son killed instantly and tragically as a teenager. Regardless if I brake to visit the grave site, I ponder this loss when I drive through Ninilchik.

On a recent trip, I shook the moisture off my umbrella and stepped inside the small church.  A few white candles burned softly; their steady flames startled momentarily by the draft of the opened door. Icons filled the tall walls that rose unproportionally high above the small enclave. A priest sat around the corner softly reading, praying, and chanting – until I moved forward.

Then the large Native priest, with hair in a thick, gray, ponytail against his black robe stood up.  I was caught off guard by his quick questions, wrapped in a broad smile. “Do you know what “orthodox” means?” “Do you know why I’m studying for the priesthood?” “Do you know why the crosses in the cemetery have the angled piece at the bottom?

He took the rapt look on my face as an invitation to continue, and started with the cross. “The top bar represents the sign of mockery that Pilate ordered for Christ’s cross – Jesus of Nazareth, King of the Jews. The middle bar is of course on which Christ’s hands were nailed.  Finally, the slanted foot rest. Russian Orthodox tradition holds that the upper end points to heaven, where the first thief, who regretted his sin went (Today shalt though be in Paradise with me); and the lower end points to where the non-repentant thief went – separation from God.”

That was the simple, yet theologically-deep explanation of the crosses scattered throughout the cemetery.

Just then, he needed to attend other business. I went outside to wander about the crosses, the earthy dioramas, and the tangled undergrowth which makes every effort to hide any remembrance of lives lived, joys shared, hearts broken, and history made.

The Old Village of Ninilchik, which lies down by the peaceful river which flows into the Cook Inlet, is filled with history. At one time there was a walking tour map. Now, the history is awakened by walking — and question-asking of a local shop-owner or resident.  Whether new or old to the Kenai Peninsula, I’d encourage very passerby to pull off the Sterling Highway and pause for a moment of spiritual quiet – no matter the weather.

Thank you to Karen Isaak Encelewski and Wayne Leman for your peer critique, corrections, and input.

Schools used to start after Labor Day. Now they start mid-August and in some districts, there are year-around schedules. Students spent many hours in school. It’s no wonder teachers have a significant impact on their attitudes and interests. A math teacher may determine the love or hate of math. An English teacher may open unexplored frontiers through a writing assignment. A principal’s rules may keep a young person on track, or stir up rebellion in another. Here were some of my gradeschool experiences:

Miss Bortel: “Let me tell you a story!” “What if we had Pet Day?” Twinkly gray-blue eyes.  Life is an adventure.  I wanted to move into her Quonset hut with my blonde pig-tailed Betty doll. I helped her write her Alaska school teacher stories.

Mr. Knight: Quiet, gentle, smiling. Eased the pain of school trauma the year before. ““Yes you can color when you finish your worksheet.” Linda and I designed and colored many “church pane” pictures.

These teachers left marks on my life. The first two are in ‘A’ is for Alaska: Teacher to the Territory. All four are in From Kansas Wheat Fields to Alaska Tundra: a Mennonite Family Finds Home.  A Reader’s Guide in the back of each book is suitable for a student book report (grades 6-12.) If you’re a teacher, for your own pleasure, read about pioneering teachers in Alaska – no exam when you finish.

~ Who was your favorite teacher? Why? ~

(First published in the August/September 2012 issue of “The Country Register – Kansas.”)

With regards to my siblings:  Mark Gaede, Mishal Gaede, and Patti Gaede, who don’t pretend to be locals. They are locals.

“We left Anchorage for the wilderness,” the travel writer for the Post said in so many words. He was driving to the Kenai Peninsula. The “wilderness”? This man has not been to Galena, Anaktuvuk Pass, Point Hope, Dillingham, …places I’d consider a bit more remote than the Kenai Peninsula – wherein lies my hometown of Soldotna. We don’t even consider our Gaede-80 homestead remote anymore, seeing that it is now surrounded by subdivisions.

The writer went on to say that most people live in Anchorage. I read that three times. Anchorage does have the largest population of any settlement in Alaska, but I got the impression he believed life didn’t really exist anywhere else; well, except in that wilderness of the Kenai Peninsula.

“Few of them (locals) spend much time on cruise ships, or flying over the Brooks Range in single-props. ..” Let’s stop right here. I fail to see the similarity of a cruise ship and flying in a single-prop over one of the most remote areas of Alaska.  My one time on a cruise ship was not like my several trips to Anaktuvuk Pass, located in the middle of the Brooks Range, of which one was in a Piper PA-14 Family Cruiser with a single prop..  It’s true, locals probably avoid cruise ships.  However, you may find some locals on the Alaska Marine Highway.

“But a lot settle down in the Last Frontier because of the nearby (read: ability to get there in a Subaru) wilderness….”  Amazing! Alaskans choose the Last Frontier for accessibility to the wilderness in a car?  Wrong again. The locals define wilderness as a place Subarus cannot access. The sourdoughs didn’t choose a population hub. Bush pilots don’t. Missionaries don’t. School teachers don’t. Commercial fishermen and women don’t. Biologists and seismologists don’t. And …there are indigenous people in Alaska and the Native population does not all reside in Anchorage.

His comments about Anchorage were not complementary. We all know what it means when someone chooses the word “charming” to describe “lack of with-it-ness” and not a “vortex of culture.” I sensed disgust. Again, he suggested the reader not act like a tourist, but a local, and reported jubilantly that he’d found a Japanese sushi bar.  I thought locals ate moose, caribou, smoked salmon strips, halibut, trout, ptarmigan, giant cabbage, and blueberries.

Before using the Travel section for kindling, I took a deep breath and read on. One day he “played tourist.” I read that again. He never started a chainsaw, flew in a bush plane, chopped wood, mended a fence so the moose couldn’t finish off the cauliflower, checked out a tide table for clam digging or set-netting, asked about berry picking, or bought a blue tarp, but he thought he was blending in with the locals.

His final paragraph: “Boy do the locals love their java!” What locals was he talking about? The locals I know love their tall, black rubber boots; a newly sharpened ax; airplane wing covers; fleece; rhubarb; the smell of damp moss on a drizzly day; buying bread that is only a week old; finding a matching set of about anything at the one Home Depot on the Kenai Peninsula; and early August, when the tourists stop clogging the road through town, the road to Anchorage, and Fred Meyer’s parking lot.

It would be an eye-opener for him to read any of my Prescription for Adventure books, where, yes, Alaskans actually fly in a single-prop airplane to the Brooks Range.  There is human life outside Anchorage.  Ask a local. 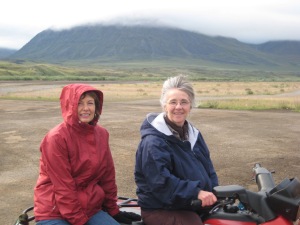 What does “a local” mean where you live?

If you’ve been to Alaska, what was your observation about the “locals”?