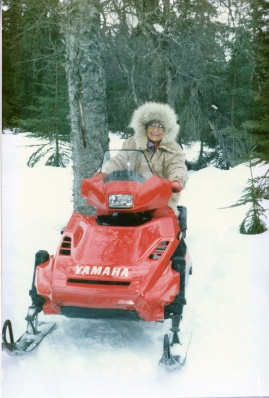 I carry my mother in me. I am strong.

She carried her mother in her, she was strong.

My grandmother carried her mother in her, she was strong.

My foremothers who migrated from Holland, to Poland, to the Ukraine, to America were strong.

The air was unusually warm and the Alaska sky was blue as the June lupines. Two generations of us sat on a quilt at Memorial Hill where my parents were buried. Four of us were grown women; one a young woman; two were girls.  We grieved the loss of a mother and grandmother. We were angry. We were bewildered. We were orphaned. We needed to heal and move forward. “How do we carry Mom/ Grandma’s character in us? How do we emulate her?” I posed a question that led to a slow conversation.

Mom was a Mennonite girl who had been uprooted from Kansas wheat fields to Alaska tundra; then to an Indian reservation in Montana; then to California – and back to Alaska. She knew about packing and unpacking with four kids. And, she knew about raising children with a bush pilot doctor who was often on-call for days and nights – and years.

She fashioned home along the Yukon River where she baked bread daily, made homemade ice cream from river ice, and thought a hot dog roast at minus 20 degrees would be “fun.” Later, on our 80-acre homestead, she used a chainsaw, shoveled feet of snow, and carried a ladder – that dwarfed her 5-foot 2-inches – so she could repair the back porch and the chicken coop. Alongside Dad, she shot a moose, field dressed it, packaged it on the ping-pong table, and cooked it for supper. On an artic Christmas night, she took her cassette player and a holiday treat, and went on a solo outdoor caroling ministry.

I emulate her by baking and taking. Most often it’s cinnamon yeast bread, baked in a round can –like Mom baked her molasses brown bread. I’ve taken to neighbors, friends, and shut-ins.  Not only do I imitate her in the things I do, but when I am in difficult situations I wear either her black diamond (hematite) ring or a garnet ring I bought with money she gave me at her last Christmas.

I carry my mother in me. I am strong.

She carried her mother in her, she was strong.

My grandmother carried her mother in her, she was strong.

My foremothers were strong.

How do you carry your mother, or another family member, inside you?

Who are the people before you that were strong?

How are you strong?