Showing slides to the students –from when I was a student. Wearing my mukluks and mittens that I’d worn there as a child.

When I flew up to Alaska in mid-April, I didn’t spend much time on our family homestead; instead, I drove to Anchorage and Fairbanks to market my books and my Alaska History Study Guide at the homeschoolers’ IDEA curriculum fairs. One day I flew into Tanana, along the Yukon River, where I’d attended second and third grades. On my way back to the homestead, I stopped in Palmer and ate at my favorite restaurant — Turkey Red Café http://www.turkeyredak.com/

Now I’m flying back up to Alaska with the primary intention of attending the Kachemak Bay Writers’ Conference in Homer. This will be my first time to attend. I look forward to learning more about writing non-fiction, creative non-fiction, and memoirs; and doing research. I anticipate informal learning through talking to other authors, agents, and educators. http://writersconference.homer.alaska.edu/schedule.htm

I’ll be staying with Cherry Jones, author of Remarkable Alaska Women, which is part of the More than Petticoats series. http://www.amazon.com/More-than-Petticoats-Remarkable-Alaska/dp/0762737980

My time on the Gaede-Eighty homestead will be brief. A highlight will be roasting hot dogs over a small fire, probably out in front of the now-torn-down original hangar, with three generations of family members: sister and husband, brother and wife, niece, nephews. A typical drizzly evening won’t dampen our enthusiasm. That’s often the way it is – 50 degrees, drizzle, mosquitoes…all minimized by the nostalgic smell of wood smoke and the sizzle of hot dogs and the pop of burning branches. All these evoking memories of the first years on the homestead when our parents were chiseling home out of the wilderness and we kids, oblivious to their sweat and toil, ran through the woods exhilarated by the land claimed as ours, the cushy moss underfoot, the fragrance of wild roses, and  the larger game trails of moose and smaller ones of voles.

“In 1961, the major population of the central Kenai Peninsula consisted of 6,000 to 8,000 people scattered over a 25-mile radius. This included the strewn-out town of Soldotna, as well as the nearby older establishment of Kenai. At ground level, it didn’t look like much. A few people actually resided in these towns, but more lived on homesteads ranging from 40 to 160 acres. Homesteads could go unnoticed, since the many World War II veterans were exempt from the cultivation requirement. Their cabins were secluded and blended into the forests, rather than peeking out on the edge of a clearing. From an airplane’s vantage, one could see seemingly random roads twisting around swamps and the Kenai River, and meandering back into the spindly black spruce forest to simple log cabins, commonly 16 by 20 feet.

Soldotna sat at the strategic juncture of two main roads: the Kenai Spur Road continued through Soldotna to Kenai and Nikiski (Ni-KISS-kee), while the Sterling Highway cutoff from Anchorage traveled toward the coastline and connected Kasilof (Ka-SEE-loff), Clam Gulch, Ninilchik (Ni-NILL-chick), Anchor Point, and Homer. There was no town center, just a collection of businesses tossed out along these two-lane highways. Two grocery stores, a gas station, a repair garage, a post office, a bar, an elementary school, several churches, a bank, and a hardware store provided basic services. Nothing was adjacent to anything else, so the simplest errands consisted of stops and starts. The nearest hospital was 90 miles away – flying through the turbulent Resurrection Pass mountain pass, or driving miles on a narrow, curving road where moose unexpectedly stuck their heads out of the woods and nonchalantly crossed over to the other side. 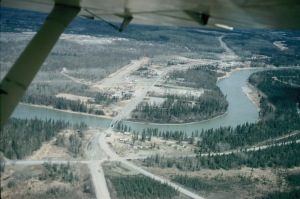 Soldotna – 1961. Airstrip in town, behind the first house we lived in. Now Wilson Street.

To begin with, we lived in town. The house had a highway for a front yard and no nearby neighbors. My siblings and I turned a shabby greenhouse into a playhouse, a board into a teeter totter, and some muddy clay into a tea set.

Our first house, along the highway. Gravel front yard. We called it “The Cold House.” Our bed sheets froze to the wall at night.

Meanwhile, Mom unpacked boxes and went about creating home, while Dad patched up oil field workers and delivered babies. All the while, they searched for a homestead.

Finding a homestead was an adventure in itself. As much unclaimed land as there was on the peninsula, this, nonetheless, was not simple. It was not a Sunday jaunt with a realtor. Often, land was barely accessible. And there were scams, such as people selling homesteads that weren’t actually available. Then, too, so-called homesteaders tried to sidestep the requirements and still acquire the patent. When the Federal Land Office in Anchorage discovered shysters who talked big about homesteading but didn’t comply with the specifications of the Homestead Act, they took back the land and resold it.

Carving home out of the wilderness.

West of town, down rock-strewn Kalifonsky Beach Road, and off of Gas Well Road, my parents found 80 pancake-flat acres. No view. No river or creek. No hill. As the crow flies, the Cook Inlet beach lay three-and-a-half miles farther west, but we weren’t crows. They didn’t seem to care about the lack of interesting features. It was their land. A narrow, sparsely graveled dirt road cut across an edge, crossed a corner of another homestead and extended to a gravel pit on a third. Off this road, Mom and Dad chose to build a log cabin and, at the same time, our primary residence, positioning them 500 timbered feet apart. They planned to trim the trees away from the road so Dad could drop his red, tail-dragging PA-14 airplane through that slit in the tall spruce trees and park it by the house.  Describing this parcel to friends and family, they called it The Gaede Eighty.”

From Kansas Wheat Fields to Alaska Tundra: a Mennonite Family Finds Home, chapter 1, “The Makings of a Homesteader.”

1 thought on “Alaska Homesteading. Roots of the Gaede (GAY-dee) Eighty”