Excerpt from ‘A’ is for Alaska: Teacher to the Territory

Setting: 1957 – Tanana, Alaska, an Athabascan village of 300 along the Yukon River

A festive Christmas spirit greeted me when I walked into the Community Hall where the Tanana Day School program was to be held. Suspended bare light bulbs illuminated the handmade decorations including red and green crepe paper streamers that swooped across the room. A heavy wire across the front of the elevated make-do stage held white sheet curtains. The children straighten their red bows and white capes, and glowed with expectancy.

People entered in puffs of frosty air and the background din increased with the growing hubbub. Some parents sat on the wood benches that lined the perimeter of the room; others found places on semi-rusted metal folding chairs. The odor of smoked dried fish, stale cigarette smoke, and warm bodies became more noticeable as the fur-clad villagers packed themselves into the room.

Florence Feldkirchner, my co-teacher, welcomed the audience and the voices quieted. I’d asked Willard, who had a good sense of rhythm, to direct the Christmas rhythm band. He’d replied with a twinkle in his eye, “Sure, Miss Bortel.”

With all the gusto he could muster and with his little baton, he beat out the rhythm to Jingle Bells and Rudolph the Red-Nosed Reindeer. His tall red hat bounced.. First the children sang; then they played their triangles, sticks, and clackers. Willard bowed proudly after each round of applause – and tipped his hat.

Next, the upper grades presented their play of the Christmas story.  Everything was going as planned and the students basked in the applause. Then it happened. On the grand finale the curtain fell. I looked up from playing the portable pump organ to see what had caused the commotion. There, on his head, with his feet in the air was little Freddie. He had slipped, grabbed the curtain, and toppled head first off the stage. The curtain followed him and only two flailing legs remained visible. The wire, which had supported the curtain, had been pulled down and was strung at nose level with the students remaining on stage. A row of eyes stared above it.

Miss Feldkirchner did not see any humor in the interruption of a nearly perfect performance. She stood with jaw set firmly, eyes glaring. Her staid personality did not equip her to deal with this comedy. She stood on the stage glowering at the students. The children put their hands over their mouths and tried to avoid her glare. I hid behind my sheet music and attempted to fill in the awkwardness with Joy to the World. In the background, suppressed chuckles broke into hearty laughter. My co-teacher pulled out a hanky and dabbed at her forehead, while forcing a closed lip smile at the audience. Brightly and vigorously I pumped out the initial chords to our final number. The children sang. Miss Feldkirchner thanked everyone for coming. The audience clapped heartily.

On Christmas Day, I woke up with a silly grin, recalling the not-so-silent night of the Christmas program. I hadn’t known what to expect for my first Christmas in Tanana, but so far it had been truly jolly and joyous. 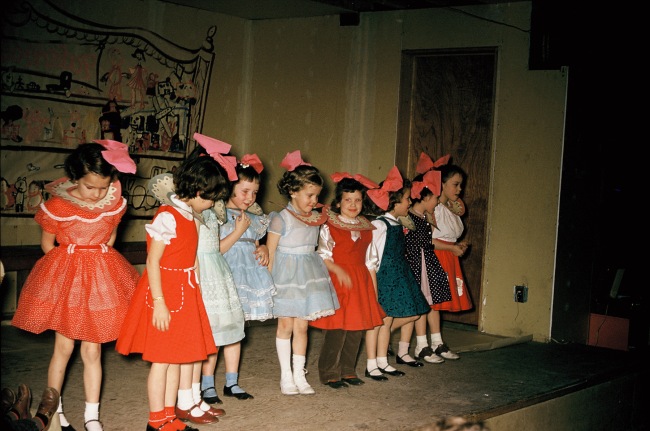 Not in Tanana, but an amusing Christmas program a year earlier in Anchorage. Notice my sister, Ruth, with slacks under her dress. That’s what she and I wore under our dresses in Alaska. That was before leggings!

1.    What was your most amusing school Christmas program as a student, teacher, or parent?

2.    How would you have handled the mishaps if you’d been Miss Feldkirchner?

3.    What Christmas program do you anticipate each year? School? Church? Performing Arts?