I suspected the bull was around the bend of heavy brush, about 100 yards ahead. We edged forward, hugging the brush along a large cornhusk-colored meadow. I could smell him. Standing up and leaning forward, I broke cover. There he was, looking right at us. Without delay, he tossed his antlers and lowered his huge head. He was going to charge! The ground shook as he pounded toward us. I backed up and nearly knocked my wife, Ruby, off her feet.

She stood paralyzed in his path. By now he was only 50 yards away. Too close for comfort. Franti­cally, I focused my gun on the monster. Just as I pulled the trigger, I heard another shot ring out. Only 37 yards away from us, the moose crashed to the earth. I didn’t know what was trembling more, the ground from the impact, or Ruby as she turned to me with terrified eyes.

We both stood gasping for breath.

“You did great,” I encouraged her. “Now finish him off.”

She managed to lift the rifle and with two shots stilled the quivering animal. My heart pounded and I could nearly hear Ruby’s. She had every reason to be panicked.

I immediately went to work gutting the 900‑pound hunk of meat. Ruby had never seen this stage of moose‑hunting, although she had cut up and packaged pounds of meat after they had been hauled home. She appeared to have recovered her sense of speech, along with some curiosity, and commented about the innards of the moose.

“He’s like a camel,” she said in amazement. “Just look at all that blood and liquid. And look at his heart – the size of my head.”

I knew she was comparing him to the cows and pigs she’d seen butchered on her family’s farm in Kansas.

The evening darkness and gnawing mosquitoes hurried us; and I decided we couldn’t complete our task at that time.

“We can let him cool down overnight, and then tomorrow morning Roy and I will skin him and pack out the meat.”

I hated to leave her trophy so abruptly, but she didn’t want to spend the night in the wilds.

Within five minutes of a sandbar takeoff in my PA-14 tail-dragger, we were back in Tanana. I was jubilant and raring to re-talk the hunt, but Ruby walked home silently, wearily. We put the children to bed and she crawled into a hot bath. She needed some time alone – and to warm up. If I ever wanted her to hunt with me again, I knew I’d better grant her that opportunity.

The next morning, my friend, Roy, and I flew to the hunting site. Seven hours later, all four quarters of Ruby’s moose were back in Tanana. This part of the hunt was familiar to her. She and I would be busy for many a night picking hair off the meat, cutting it into various cuts and sizes, and wrapping it for the freezer.

I was mighty proud of Ruby’s hunting adventure. Since I hadn’t taken my movie camera along to document her story, I decided we should mount the head. 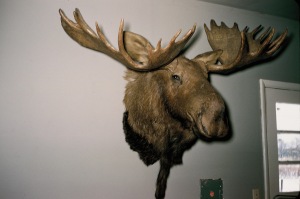 This was Ruby’s first, but not last moose hunt. She had proven she could bring home the moose and cook it, too. After this, she never really took to hunting with the airplane, but later, when we relocated, she was more than willing to get up early or drive at dusk, with two guns between us.

The head mount was sent to Ruby’s parents, in Kansas. Later, it was transferred to Elmer’s parents in Reedley, California. In a third move, it resided at Elmer’s brother’s, in Fresno, California.

Several years after Dad’s brother died, his wife, Marianna, decided to move to a retirement community. The moose would not be moving with her. She and her family decided it should be returned to the Elmer and Ruby Gaede family. We siblings agreed – it needed to migrate “home,” to the Gaede-80 Homestead, outside Soldotna, Alaska. 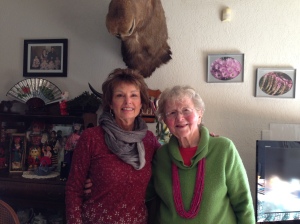 All four generations of the Harold and Marianna Gaede family were distraught. The moose had been a part of their lives – for decades – and every Christmas it was decorated with ornaments. Knowing their pal would no longer be a part of their celebrations; they each had their picture taken in front of the moose at their annual Christmas get-together in December 2014.

The re-transplantation could not happen with a quick trip to UPS, a Large Priority mailing box, or Fed Ex at the front door. In fact, nothing about this process would be easy – but it would be a story-maker.

Here’s how it went:

Step #1: Remove the moose from the wall. 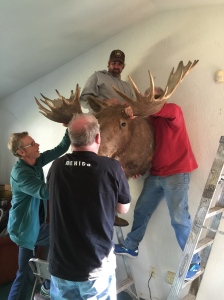 The head mount weighed approximately 100 to pounds and was bolted into the wall. Don, Ken, and Paul Gaede, along with friends, tackled the project with ladders and humor. After 15 minutes of unscrewing the bolts and holding onto the antlers, the moose landed – on the floor.

The Moose has landed

Step #2: Figure out how to crate the moose.

Don contacted a packaging company and got a bid for just over $500.00.

Steps #3: Haul the moose to the packaging store. 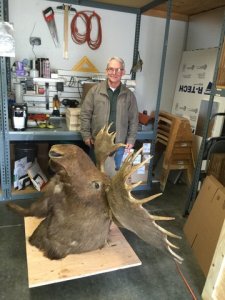 How to crate a moose

Not only did the moose get crated up, but during the packing process for Aunt Marianna, the cousins found a briefcase monogrammed with EEG (Elmer E. Gaede), which we siblings readily accept for our archives. This got packaged with the moose head. 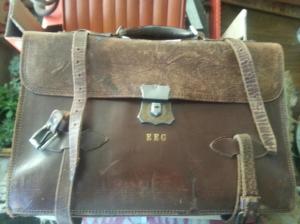 “FYI, I’m having trouble transporting the moose head to the packing company and thence to my garage; Justin’s pickup bed is too small.  Will keep you apprised.” Text from Don to Naomi.

During the loading process, a community security guard stopped by. He’d never seen a moose before, much less one that large.

I did a search on amazon for “toy moose” and found a furry-faced smiling moose head. 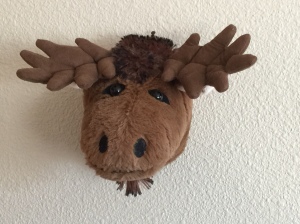 Step #6: Transport the moose from California to Alaska