Mom with a windmill reminder of her Kansas farm roots.

I can see my mother in the garden, with red bow in her silver, knotted hair; hoe in hand, her skirt fluttering in the gentle breeze. A garden hose stretches taut along the dusty driveway to the garden where potatoes, carrots, cauliflower, and frilly leaf lettuce have optimal growing conditions. Root crops grow well in Alaska’s sandy soil. However, even with fertile silt and a tall fence to keep out salad-seeking moose, the vegetables must mature quickly; the frost-free season between early June and mid to late August is much too short to unhurriedly bask in the midnight sun.

Ruby Leppke Gaede’s roots originated in the wheat fields of Kansas, where she was accustomed to sticky summer heat, waving fields of grain, and a sun that leisurely settled at the end of the plains. What a shock to transplant her to Alaska, where she’d followed my father with his medical practice in 1955.

In the village of Tanana, along the Yukon River, she staked out a garden. Sweet peas in a myriad of brilliant colors intertwined in the wire fence surrounding the garden. Potatoes, cabbage and carrots sprouted within these confines. She tried tomatoes. The Athabascan Indians laughed! The abbreviated summer culminated her hopes in an early harvest, and she was left with green tomatoes and frost-wilted vines.

A brief year’s relocation to California in 1960, allowed her warm weather crops to flourished. Her appetite for fresh produce extended to the peach and mulberry trees in our backyard, as well as the plethora of fruit stands in the San Joaquin Valley. After years of Alaska canned fruit and vegetables, she was in the Land of Milk and Honey, or at least of watermelons, apricots, and plums.

In 1961, my father accepted an offer on the Kenai Peninsula in Alaska. This time, she settled onto an 80-acre homestead. After hand-clearing 10 acres with my father for an airstrip, Mom planted a garden. The contest was not only with the diminished growing season, but also with the ever-encroaching grass, chickweed, horsetails, and other persistent natural vegetation. 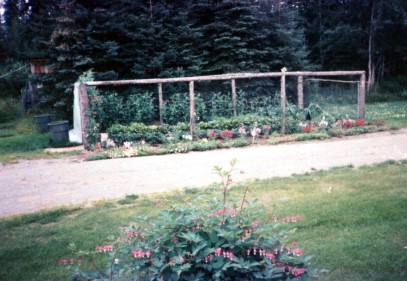 The gardening tradition sprung forth in her children. My mother stored seed potatoes beneath the basement stairs. In spring they’d go wild, sprouting like octopus.   Mom would cut the potatoes into chunks, each with an “eye.” Mark, my little brother, fascinated by this basic level of horticulture, would tag along after her. He’d grab some potatoes, then enthusiastically and randomly dig holes around the driveway, much like an Alaskan Johnny Appleseed. Potato plants sprouted in the oddest locations, which was a source of delight for Mark.

Even when a plant yielded massive potatoes in the favorite cat litter area, Mom forbade him from ever planting there again.

Over the years, my sister, Ruth, has remained on the homestead. At one time, she had a designer garden with burgundy, periwinkle, and white Bachelor Buttons playing in the fence; and strawberries growing in careful rows. Delicate purple Violas bookended the lacey carrot-topped rows. She tried peas, which scarcely developed peas in the pods before the Alaskan growing season skidded to a halt.

It’s been twenty-five years since Mom died. The rotted log fence around the garden has long ago been dismantled. My siblings nudge me into reality. Mishal corrects the facts, telling me that in the beginning Mom didn’t wear skirts; instead, she tucked blue jeans into tall, black rubber boots, and wore rubber gloves. Mark says that carrots weren’t always plump and crisp, and that radishes were wormy.

Nevertheless, sometimes, out of the corner of my eye, I see my mother chopping the chickweed, pulling closed the cauliflower leaves, and thinning out the carrots – in a billowy skirt and a red bow in her hair. 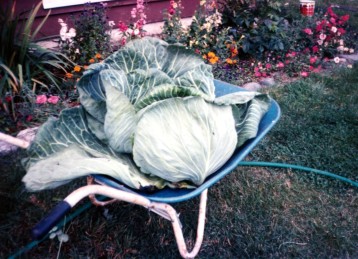 A fact: Mom DID grow huge cabbage — enough for many servings of borscht!

(Adapted from first printing in The Peninsula Clarion, May 2001.)

All text is Copyright © Naomi Gaede-Penner. All Rights Reserved.

1 thought on “You’ll Find Her in the Garden”