When Anna was four, her parents built a house on an acre of ground on Napoleon Road, at the southeast edge of town. They felt this would be a better place to raise their three children. Anna cherished the two-story, yellow frame house with a broad porch across the front and shutterless windows. This house with four bedrooms, an attic, a basement, and a two-car garage was built for $5,000 in 1927. 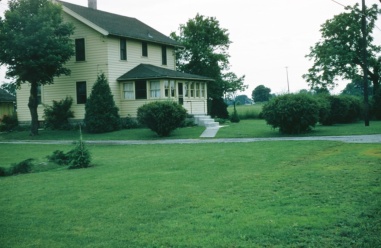 Delicate white-flowered spirea bushes clumped beside the house and all along the front and side yards. In the springtime, Anna would scamper across the driveway and out by the ditch to pick white and pink- flowering spring beauties. The sprawling green lawn was a wonderful place to play, and after supper on pleasant summer evenings, David, Millie, and Anna would beg their mother to wait to do dishes so they could play baseball while it was still light. Each time, their mother would tolerantly agree; then, instead of waiting for their help, she would wash and dry the dishes before the lengthening day’s-end shadows pushed the children back into the house.

Millie and Anna shared a bedroom upstairs. Their father had used his decorating skills and painted a double oak bed with pink enamel. Going beyond the basics, he put decals on the headboard, with a fluffy, white rabbit over Anna’s side and a bushy-tailed squirrel over Millie’s. In this bed, the sisters would talk about the day’s events, laugh, and share their hopes. Before snuggling under the soft blankets, Millie would say to Anna, “If I’ve said or done anything to you that is wrong today, please forgive me.” In return, Anna would ask her sister’s forgiveness. Even at these young ages, they practiced the principle of “Do not let the sun go down upon your wrath.” Before saying “good night,” they would take out their treasured chewing gum and deposit the wads on their individual flat bedposts.

Their brother’s room held an air of mystery. David’s edict of “NO TRESPASSING BY SISTERS” set the stage for their fascination. Anna would put her eye to the keyhole in the door of his room. Trains dominated his attention. Railroad timetables and paperwork, made out by brakemen in a real train caboose, lay fastidiously sorted on his desk in his make-believe railroad office. He’d collected these treasures from his friends, the railroad men who stopped on the pullout near the Bortel house, while waiting for another train to pass. Anna’s eyes moved to the wall by his bed where he had a special light switch. David had fixed a block signal, such as one would see at a railroad station, on the airing deck outside his second-story room. The train engineers were aware of his block signal with red, amber, and green lights, and when a train clattered by at night, awakening David, he would flick the switch on and off and the engineers would “toot” back a greeting.

When David was thirteen, an congenial engineer invited him to put a big locomotive into action. The family sat around the dinner table listening spellbound as he elaborated on the grand event.

“I pulled 100 cars!” he burst out. “The crew was amazed when I released the air brakes, backed to take up the slack, and put on the sanders and started forward.” The baked chicken and mashed potatoes sat untouched on his plate as he continued. “Firing up the boilers came natural to me.”

Along with his room, David also put his bike off-limits to his sisters. One summer when he spent two weeks on Uncle Newman’s farm, Anna decided it would be her golden opportunity to learn how to ride a bike. David would not have to know she’d borrowed his. Up and down the hard-packed graveled driveway she practiced. After some tumbles, and fighting the frame bar that extended from the seat to the handlebars, she felt brave enough to venture out onto the road. Traffic was not heavy on the paved road and she relished the feel of wind playing in her short bobbed hair.

After she accomplished her goal, her father heard the stuck-in-a-rut tune of “Won’t you please get Millie and me a bike?” One afternoon while helping her mother can cherries in the basement, her father’s voice boomed down the stairs, “Come quick! Look at this Blue Racer!”

They flew up the steps, thinking there must be a snake outside. But, instead, there was a beautiful new blue bicycle!   Anna jumped up and down, hugged her father, and shouted, “A bike! A bike!” No more riding David’s boy’s bike anymore. She and Millie had a wonderful girl’s bike.

When the corn stood ripe in the field with golden-brown silk, Anna and two neighbor children decided to try their hand at roll-your-own cigarettes.

“I can find matches and newspaper in the kitchen,” Anna volunteered. “Then let’s climb up on the building behind the garage.”

They took along newspaper, and carefully formed cigarettes with corn silk from the adjoining cornfield. Furtively, they lit their clumsy rolls, coughed and sputtered.

“Anna! Come down at once.” Anna’s father’s firm voice interrupted their concentration.

The children looked at each other in astonishment. How did he know they were up there? Smashing out cigarettes, they climbed quickly off the hot, rough roof. Instead of delivering the anticipated lecture on smoking, they heard about the concern over fire and the safety of the buildings. This was the beginning and ending of Anna’s smoking habit.

Anna thrived on relationships and social life. She and her best friend, Betty Smith, played house with their dolls beneath the back porch. Other days, they shaped mud into pies, and decorated them with ripe red seeds from the asparagus bed. Mud felt good between their toes, too. On very hot days, the tar would come up on the asphalt road in front of Anna’s house, and they’d take off their shoes to squash the tar bubbles with their big toes.   After amusing themselves for a while, they’d go to Anna’s house where her mother would clean their feet with old rags and turpentine. In late summer, the two girls would scratch their legs and arms climbing the prickly thorn apple tree. The bumps and bruises didn’t thwart Anna’s explorations and adventures.

Growing up in the Depression did not adversely affect the Bortel family, but made an impression in other ways. For example, it wasn’t uncommon to hear a rap at their back door. Anna would peer out the window and see a “hobo.” Her father tried to explain the “Depression,” and why men were out of work. The Bortel house, 500 feet from the New York Central Railroad tracks, seemed to be marked as a charitable stop. This was no surprise. Mildred Bortel would always offer the strangers a tasty plate of leftover meat, potatoes, and a thick piece of homemade bread. The ragged men with despairing eyes would slump on the cement step between the house and the garage, and quickly and quietly fill their empty stomachs.

One time as Anna stood curiously, but safely behind David, she noticed a hobo’s toes poking out of his shoes that were tied onto his feet with frayed cords.  “Wait here on the steps,” Mildred instructed the tattered man.

Within a few moments, she was back with an extra pair of her husband’s footwear. Truly, she took to heart and demonstrated, Matthew 25:35, “For I was hungry and you gave me something to eat, I was thirsty and you gave me something to drink, I was a stranger and you invited me in, I needed clothes and you clothed me. . .” Before she sent the men on their way, she would hand them Christian literature as food for their souls; sometimes a religious magazine, a Sunday School paper, or a story tract.